AT&T Hackathon! We came. We hacked. We won! 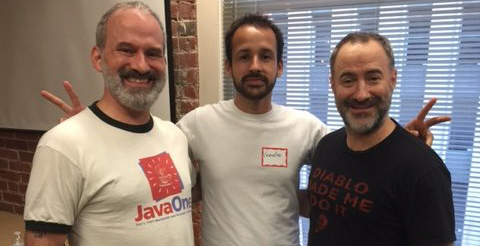 AT&T Hackathon , Dallas. Brainfood team Ean Schuessler, Erik Schuessler (not pictured), Ron Wilson, Leandro Silva were able to bust out an awesome idea in 24 hours that Erik and Ean had been thinking about doing at the AT&T Hackathon. “It was awesome to work with a team of folks to come up with a nifty gadget or at least the start of one in 24 hours” Erik said after learning about winning 2nd place. “We all had a good time working together to make the basic technology of the system work” Ean commented when asked about the project. “AT&T Hackathon is having an awesome event in downtown Dallas. They are providing refreshments, equipment and a location. Unfortunately this event would seem to conflict with me having a party celebrating my 46th birthday (actually on the 18th). I realized, however, that this is a fortuitous way to build awareness of AT&T Hackathon’s event and have them buy refreshments for all my nerd and designer friends. It’s free! The theme is «vehicle hacking». I’ll bring a cake! This should be fun for technical and non-technical people alike. I intend to focus on my bicycle but will delay any final decisions until we see what kind of ideas people come up with during the AT&T Hackathon. Come wish me a happy birthday by hacking on your vehicles! (preferrably bikes!)” The event continued into the night as Ean worked away at getting the microcomputer working and Erik worked away at crafting a site with branding.

What is the AT&T Developer Program?
The AT&T Hackathon and DevLab programs were started as a way to help educate about mobile application instruction and creation, and to put together events where people network with other like-minded individuals interested in building mobile apps. Please check out the official AT&T page and we hope to see you at the next event!

Having presented the test, gladwell next asks whether performance on it can professional essay writers be improved by making it more difficult to read, as by presenting it in a less legible font